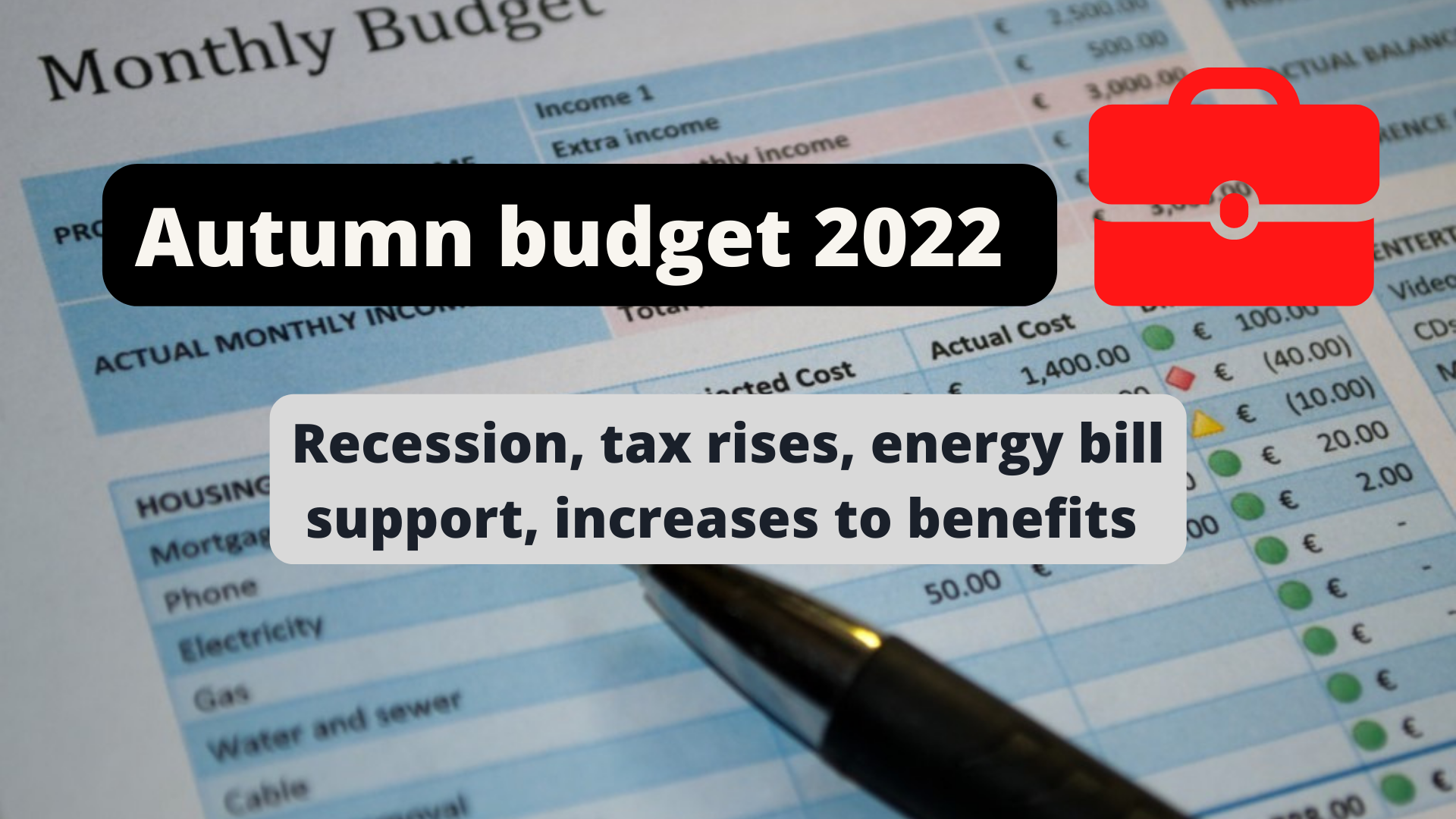 The November 2022 budget is a package of tax rises and public spending cuts as new Chancellor Jeremy Hunt seeks to battle recession and inflation. Here’s a summary of the main announcements.

The government has confirmed that the UK has entered recession. The Office for Budget Responsibility (OBR) says higher energy prices driven by the war in Ukraine are largely to blame for the downturn. It also believes the country will not start growing again until 2024.

A decision to freeze income tax thresholds means that many people will end up paying more tax over time. Receiving a pay rise – even below current inflation rates – could push you into a higher tax bracket.

Some non-taxpayers may start paying 20% tax on a portion of their income. Even those who stay in the same tax bracket will pay more tax as their wages rise.

A 10.1% increase to pension and benefit payments means that over 12 million pensioners will see their state pension rise by £18.70 a week from April next year, A single person aged 25+ on universal credit will see their benefits increase by £33.83 a month.

This adds to previous cost of living payments worth £650 which have already been paid to millions on certain benefits, with a further £150 paid in 2022 to those on certain disability benefits.

Help with energy costs has been extended for all households, but at a less generous level. The protected bill for a typical household will rise from the current £2,500 to £3,000 in April.

Without government help, average bills would have gone up to about £3,740, analysts suggest.

Jeremy Hunt says he has accepted a recommendation to increase the national living wage by 9.7 per cent. This means the hourly rate will be £10.42 from April 2023.

Stamp duty cuts announced in the mini-Budget will remain in place, but only until March 31, 2025.

The aim behind this is to encourage banks to be more flexible around mortgages and keep the housing market stable.

Windfall taxes will raise £14bn, including a new temporary 45% levy on electricity producers.

An almost £14bn tax cut on business rates will benefit about 700,000 businesses.

Employment allowance will be retained at a higher level of £5,000.

The government will focus on economic growth, despite having to find budget savings. Energy, infrastructure and innovation will be priorities. Investment in energy efficiency for homes and industry by will be doubled by £6bn from 2025.

Need more clarity about what the Budget means for you or your company? As small business accountants in the Lune Valley, we provide tax advice, payroll services and much more. We’re pleased to help, so get in touch.

We use cookies on our website to give you the most relevant experience by remembering your preferences and repeat visits. By clicking “Accept”, you consent to the use of ALL the cookies.
Cookie settingsACCEPT
Manage consent

This website uses cookies to improve your experience while you navigate through the website. Out of these, the cookies that are categorized as necessary are stored on your browser as they are essential for the working of basic functionalities of the website. We also use third-party cookies that help us analyze and understand how you use this website. These cookies will be stored in your browser only with your consent. You also have the option to opt-out of these cookies. But opting out of some of these cookies may affect your browsing experience.
Necessary Always Enabled
Necessary cookies are absolutely essential for the website to function properly. This category only includes cookies that ensures basic functionalities and security features of the website. These cookies do not store any personal information.
Non-necessary
Any cookies that may not be particularly necessary for the website to function and is used specifically to collect user personal data via analytics, ads, other embedded contents are termed as non-necessary cookies. It is mandatory to procure user consent prior to running these cookies on your website.
SAVE & ACCEPT